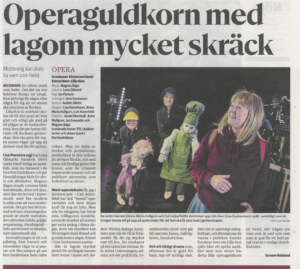 Sundsvalls Tidning has reviewed the opera “The terrible story of Little She” in november 2019. They wrote:

“Magnus Båge’s music holds both art music, dance and jazz, but has its base in art music with a little modern spice without being modernist. It makes it easy-listened and more mood-creating than strongly melodic, it expresses fear, joy, relaxation, caution – the whole spectrum of emotions that opera music should. ” “Last but not least, this little opera gem has a twist, where the question of who is evil and who is good gets a completely different answer than in ordinary horror stories.”

“With strong and personal presence, Båge is creating the beauty and freshness in the piece. It is light and gentle with lively variations which particurarly are carried by the flute, whose tones sometimes are played like gusts on a watery surfice. Ingrid Lindskogs harp is communicating warmth and speech, like an emotional dialouge, and the strings of the orchestra is welling forth like the masses of the sea. Here is storm and quite sadness, in tight teamwork between orchestra and soloinstrument. Laurins work touches and awakens feelings, and the audience welcomed with long applauses.”

“Now, more then ever during the evening, different feelings are pouring out due to the outburst. Magnus Båges brilliant flute playing makes you lose your breath through its virtousity. The feelings varied to the extreme and Ingrid Lindskogs pleasant harp playing created an extra dimension somehow through the gathered forcefield of the orchestra.”

“The event of the evening was “Concerto for flute, strings and harp”, written by A-L Laurin, which Camerata Nordica is premièring on their present tour with the soloists Magnus Båge, flute, and Ingrid Lindskog, harp. Båge opens with a breathtaking solo where he uses his specially constructed mouthpiece with which he can create stepless glissandi. He is contineously leading. It is an entrancing work, melodic, rythmical, light and breathy, but also with darker colours. The combination of the soli instruments flute and harp is brilliant. The vital tutti passages in the orchestra gives me a vision of a large tree that is rattling in the wind. It has obviously been inspiring to write for a flute player like Båge. The both soloists also played a fine encore, a berceuse of the finnish composer Armas Järnefelt.

“Flutes were stimulating to the imagination”

“The orchestra accompanies oftenly with long lines of flexible harmonies without disturbing details. The soloists voice close to talk to the listener. Here, you will find no predictable themes, it is changed in the moment with sudden outbursts or moderation. The fluteconcerto demands a great precision and energy of both the soloist and the orchestra. It is lucky then, that that Sandström composed this concert with Magnus Båge in his thoughts. He is completely phenomenal with his instrument. Accept for the tonequality and the flawlessness, Båge creates the whole palette of feelings to shape the music. Engeset is as usual stable and reliable as a conductor och corresponded an energetic and colourfull link between the orchestra and the soloist.”

Jan Sandströms newly written Concerto for flute is really an exciting experience, and with the more and more acknowledged Magnus Båge as a soloist, this event became an inspiring moment. This new composition, which is commisioned by Dalasinfoniettan, Swedish Chamber Orchestra and NorrlandsOperan Symphony Orchestra, starts with a lonely flute; in a spirit of Carl Nielsen-but from beginning to end it is the soloist who leads the music; the flute is this musics austronaut, on great adventures in magical exotic spaces; with transparent, veiled music. The flute is the Leader who entices the orchestra out to foreign land. Some distant passages gets close to a weightless state. It is-paradoxically enough, both transparent and intensive music.”

“I get the feeling of twenty light years in twenty minutes.”

A fine review was published in Uppsala Nya Tidning when Magnus performed Shimmering Blue – Rolf Martinsson’s flute concerto together with Paul Mägi and Uppsala Chamber Orchestra in the concerthall in Uppsala, march 2010.

“A very beautiful performance of Rolf Martinssons flute concerto Shimmering Blue , op 70 was the big – and only – profit of the thursday concert in Malmö Concerthall. Soloist was Magnus Båge who premièred the piece in 2005.”

Shimmering Blue in the Concert hall in Stockholm with Gävle Symphony Orchestra during the composer festival 2008.

”The brilliant flute player Magnus Båges own constructed glissando-gadget is used by Martinsson in the opposed middlepart of the daydreaming flute concerto Shimmering Blue (2005). Glenn Larsson assisted on vibraphone and on cymbals in Martinssons jazzy encore Energy.”

“The less extensive orchestra makes a nice and in many ways a pleasant and relaxed accompaniment in Mozart’s D-major concerto to a all together stunningly capable flute player. But then, Magnus Båge has already achieved a genuine international reputation as a flute soloist. Many works are particularly written for him among them the acknowledged concerts by Rolf Martinsson och Jan Sandström.

Magnus Båge can both let the flute flick in the forte passages completely impeccably but also for example in the slow middle movement form a softly rounded and characteristic flute tone balanced with a sensitive orchestra. A lovely experience.”