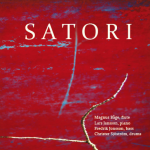 Review of ”Satori” – published in 2015 on Prophone/Naxos

Special music where the improvisations give air and adventure

Satori
Magnus Båge, Lars Jansson,
Fredrik Jonsson, Christer Sjöström
(Prophone/Naxos) To bring together classical music and jazz is not easy. Many attempts have been done, some not so succesful. The turn has now come to Magnus Båge who is also the producer of “Satori”. He has together with the piano player Lars Jansson composed half of the material on the cd, Jansson has written the rest of the music. The title of the cd means “enlightenment” in japanese. The music has a meditative form which can get close to the territory of the jazz – but not always. The timbres is shifting between light improvised and more strictly held parts. The open improvised parts give air and tension to the often existing withdrawn playing where the rhythms are relaxed and subordinate Båges and Janssons sensious intentions.

This Cd can be ordered by Magnus Båge

The Fluteconcerto “Shimmering Blue”, recorded with Malmö Symphony Orchestra in 2007.

However, the most beautiful is “Shimmering Blue”, the fluteconcerto from 2005 written for the shining soloist Magnus Båge and Malmö Symphony Orchestra, with its slowly gliding Sibelius timbre: it is like watching the dancer Virpi Pahkinen do eights on a frozen lake completely forgotten by the world.”

This Cd can be bought at Swedish Music Shop. Thanks to Daphne Records for the music files!

Flute Music, recorded in 2003 by Sforzando Production, C-A Dominique among others.

“This is a real knockout recording… not another flute record but a milestone in the art of  flute playing.”  Sir James Galway

This Cd can be ordered by Magnus Båge or by Sforzando Production.

Chimera Trio with Fredrik Lycke and Marcus Möller, “In your dreams”, recorded in 2004 by Snickeboa Productions

This Cd can be ordered by Magnus Båge